I am feeling really called to say what’s on my heart. No more draft posts and not publishing. No more waiting to articulate the right message. If this lands, it lands. If it doesn’t, it doesn’t. My platform can never fully satisfy the appetite of every single person and I’m okay with that.

It is undeniable times are fucking tough right now. Our world is in a climate where people are hurting and I’m not talking about #Covid19, I am talking about RACISM.

Racism clearly exists. It is deeply embedded in systems that were built to make the white man superior to anyone who isn’t, it exists in our workplace recruitment processes and often is the undertone of sarcastic comments. These are just a few examples.

I don’t know about you but my thoughts are messy. After seeing hundreds, maybe even thousands of posts about what we should be doing (if we haven’t been already) I was really triggered.

As a Brown woman the experiences I’ve had throughout my life have conditioned the way I show up in this world. I’ve thought about why I pick and choose my moments of wanting to pipe up, how I’ve played a role in the continuity of racist jokes and remarks in my social circles and how I have enabled these behaviours because trying to call people out on stuff like this requires an explanation and I decided it wasn’t worth it.

What happened to George Floyd should have NEVER happened but his story represents millions of other lives that have been lost due to systematic injustice, police brutality and racial discrimination. His death has caught the attention of the world and has propelled people to look into their own backyards and acknowledge what is happening on the soil they call home.

While all the posts on social media show us how we can advocate, I believe we are bypassing the most important step, reflecting on ourselves and how we show up in the face of racism. We can sign the petitions, donate, share the posts, walk the streets to protest, write the blog posts but be sure in the midst of all of this we are checking ourselves and owning our part.

I acknowledge even as a Brown woman I have taken the piss out of my own, I have made white people feel inferior when in the presence of a crowd mainly made up of brown people, I have used the N word but called white people out when they’ve used it. These double standards also contribute to the racism we wish to dismantle in society.

Checking myself hasn’t been comfortable. I have felt conflicted and disappointed but I take heart in knowing that I am human and have my own shortcomings. It took time and heavy dialogue between myself and some loved ones to understand my own blind spots, biases and in some cases, my own privilege. That being said I now have enough self-compassion to forgive those versions of myself who knew better but didn’t do anything.

What I find most difficult to grapple with is people go through their lives facing incredible, ungodly injustices because of the colour of the skin or their ethnicity. Our activism to show up for them shouldn’t be preformative or only a hot topic when it’s trending because BLACK LIVES deserve more from us than that.

June 25 will mark one month since George Floyd’s death. The black squares are slowly moving down peoples Instagram feeds and the tone of our stories are having less and less focus on the Black Lives Matter movement.

I’m not saying anything against that because I don’t believe that social media is the place for us to measure peoples advocacy, but what I do believe, is true advocacy is most effective when what you’re saying isn’t just lip-service or on par with popular opinion.

Our convictions as human beings are created in the secret places of our hearts. The fruit of that will show for itself. So before we go hitting people with a shame stick for not doing enough by whoever’s measure – check yourself. Some people may choose to do the work quietly and that’s okay. A revolution has many lanes. 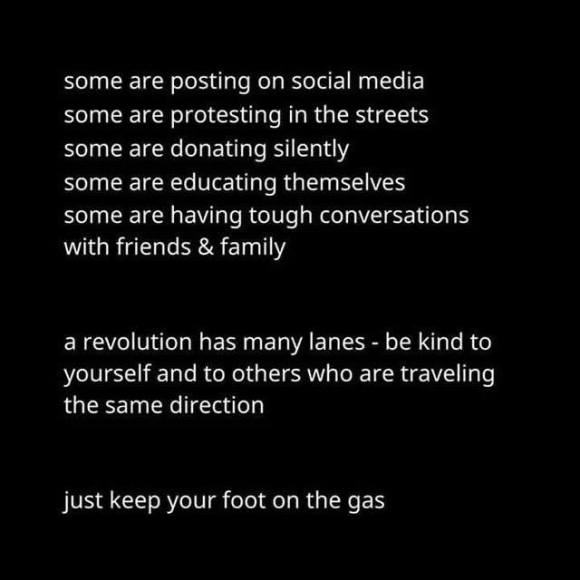 The work isn’t done. For the Black Lives Matter movement to be successful we must be committed to continually supporting the movement.

There are great resources online highlighting what to read and who to follow if you want to stay informed. Before you ask who or where, use this as an opportunity to kick-start educating yourself.

Caring only when it matters can be tiring because overtime that care will fade. To encourage longevity building habits is the key. In the context of racism, diversifying your social media feeds, listening to BIPOC through podcasts and YouTube videos and actively showing support where you can are some solid places to start.

And lastly seize opportunities to be anti-racist. Let’s choose to be brave. That bravery can look like you having a hard conversation with friends and family, calling racist behaviour out when you witness it or setting new boundaries if you have to.

We are all on a journey. If we make mistakes along the way, that’s okay. As we are constantly presented with new knowledge give yourself permission to change your opinion and pivot as often as possible. And to the same length you are willing to empathise with yourself, be sure to extend that to others.

I say all of this to encourage you to reflect and sit with yourself. The fight to end racism is long but rest assured in motion. I think the sooner we accept we all have a part to play (whether big or small, monetary or not), the more effective the change can be.

We may not live to see racism end in our lifetime but imagine the generations to come who will live in the fruit of our fight. That’s a powerful thought but nonetheless, possible.

Be brave and be kind,

One thought on “Racism: The fight continues”